When Pixsy photographer John Slemp shared his aviation photography project- Untold Stories with us, we vowed to help him publicize his amazing work and the stories that he works so hard to portray.

John Slemp is an ideas man. He’s also a US veteran and longtime photographer who has had a fascination with uniforms and military history since childhood. One day in 2014, he stumbled upon a series of antique motorcycle jacket photographs by Dan Winters and was instantly inspired. He embarked on his own unique project – to photograph the bomber jackets of WWII aviators. He uses images of the patched garments to tell moving stories of their owners’ lives to amazing effect. This A-2 jacket belonged to Captain Stephen M. Hoza of the 94th Bomb Group. He married his sweetheart Delores after the war, and passed away in 2010. The religious icon hastily sewn into the jacket liner caused me to realize that “even Captains prayed” during their hazardous missions. Courtesy of the Smithsonian National Air & Space Museum.

Slemp grew up in a military environment – his father was a Green Beret – surrounded by soldiers in all sorts of uniforms. “Fatigues, ‘Class A’ uniforms for parades and ‘Dress Blues’ for formal events are all deeply rooted in function and military history,” he explains. “So it is with the A-2 flight jacket and the M422 jacket Naval aviators wore in WWII.” 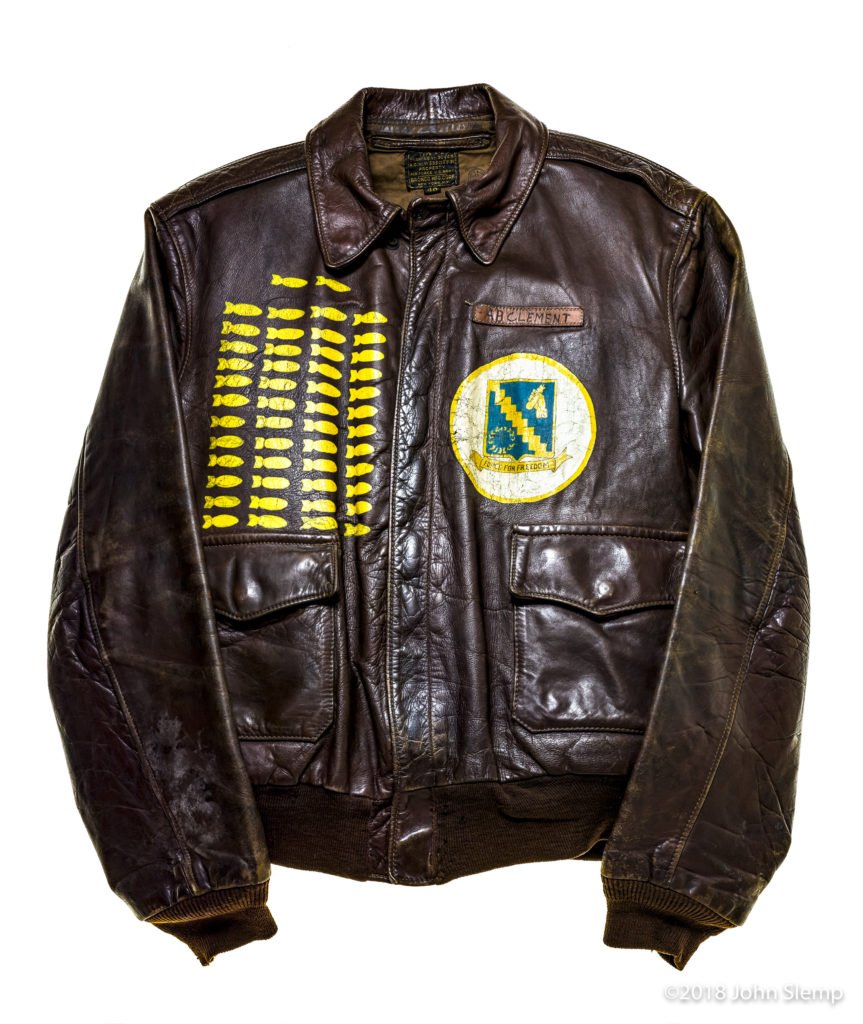 A B-24 top-turret gunner, SSG A.B. Clement’s jacket was the first one photographed for the project, graciously loaned by his family. Each bomb represents one of the 50 missions he flew, operating with the 15th Air Force in the Mediterranean Theatre. After the war, he settled in Charleston, S.C.

During WWII, aviators’ jackets were extravagantly decorated, often hand-painted by talented fellow soldiers in exchange for beer or cigarettes. Colorful and covered in symbology, the jackets feature interesting details. Bombs represent the number of missions flown, and the name of the owner and his unit crest take pride of place above the left front pocket. The back side of SSG Clement’s jacket. “Miss N-U” was the name of his aircraft. While considered pretty tame by today’s standards, many jackets that sported scantily clad women were not worn after the war in the serviceman’s home town. It just wasn’t done, and because of that unspoken moral taboo, many jackets survive, as they were hidden away for decades in forgotten closets.

Though the practice of painting jackets was officially discouraged, it thrived as commanders sought to boost morale. The jackets provided aviators with a sense of unity and camaraderie. At one point, even drafted Disney artists were commissioned to decorate jackets and planes, and cottage industries sprang up in around many military bases across the world. “Part of my interest in photographing these jackets is that not only are they military artifacts, but they largely spawned a new art form,” says Slemp. A “blood chit” inside the jacket of Marine Lt. General R.P. Keller, one-time commander of the famed “Black Sheep” Squadron. Worn largely by aircrew in the China-Burma-India (CBI) Theatre of operations, it was a message printed in all of the languages they might encounter if brought down in enemy territory. It basically says “I’m an American airman, here in your country fighting the Japanese. Please provide food and shelter and you’ll be rewarded.” Still in use today, “chit” is an Indian word the British picked up and means “ticket.” Notice the red number at the bottom. If the person claiming to have rendered aid to an airman couldn’t supply the number, no reward was given. Courtesy of the National Naval Aviation Museum, Pensacola, Florida.

Slemp creates his photographs with a relatively straightforward setup. He uses a piece of white 4×4 feet plexiglass lit by two strip lights placed on the floor beneath to isolate the jackets in a field of white. Two pieces of plywood support the plex at the top and bottom, with a small post placed in the center to prevent sagging. The surface of the jacket is lit using a Profoto Beauty Dish, with white fill cards on three sides. Then Slemp simply shoots down on the jacket from atop a six-foot ladder.

With a view to offering fine art prints for sale and displaying life-sized prints in a traveling exhibition, Slemp uses a Phase One 645DF medium-format camera coupled with a Leaf Credo 60 digital back. Two 30×40 inch test prints reveal spectacular detail, thanks to the file size and the sharpness of the Schneider 80mm 2.8 LS lens. While shooting, he keeps his camera tethered to a MacBook Pro, using Capture One software to view and adjust the lighting and/or jacket as needed. Captain Everett Graves was a Humboldt, TN. native, and completed 50 missions with the 762nd Squadron (the Black Panthers), of the 460th Bomb Group, flying B-24 Liberators out of Spinazzola, Italy. Overseas from 25 January 1944 until 21 November 1944 he was wounded on his 9th mission by flak in his neck and shoulder, which narrowly missed his spinal cord. After 4 weeks in the hospital, he returned to flying duty, completing his remaining 41 missions. He was awarded the Air Medal with 3 Oak Leaf Clusters, the Distinguished Flying Cross w/1OLC, the Purple Heart, and other Theatre ribbons.

The Future of the Project

In the four years he’s been working on the project, which he plans to turn into a book, Slemp has photographed over 120 jackets and counting. Presented alongside detailed information about the owners’ lives, families and wartime experiences, his images draw attention to the sacrifices made by these men, honoring and memorializing them in an original and powerful way.

“To date, the project has been self-financed and I’m actively seeking corporate partnerships to help sponsor the book’s production costs. While the amount is not insignificant, it could be a wonderful vehicle to convey a company’s values and demonstrate support of our veterans and military aviation history in general. Should you know of anyone who has an original A-2 jacket (preferably with artwork on both sides), please consider putting us in contact. The condition is irrelevant, as I want to show them “as is.” As a way of saying “Thanks!” prints are being provided at no cost to the owner, or in the case of the museums, digital files for their archives. Several jackets have been shipped to me, photographed, and returned without incident, but there are those who understandably would rather not entrust such family heirlooms to the vagaries of shipping companies. One daughter/granddaughter tandem drove from Iowa to Atlanta, bringing a jacket and other artifacts. This level of commitment floored me, but such is the nature of this project and the passions it has aroused” This jacket was photographed in Atlanta the week prior to Slemp’s departure for AirVenture 2015 in Oshkosh, Wisconsin. While there he met a fellow who casually mentioned that his dad had been a B-17 crewman and that the pilot’s name was Walter Thomason. Without a word, Slemp showed him this picture on his iPad, and said “This Walter Thomason, of Uncle Tom’s Cabin?” “Yes!” was the excited answer, and the two men got goosebumps just thinking about the odds of finding a connection to another member of the same crew. The second jacket has now been photographed too, as Slemp wants to place them side by side in the book.

To find out more about “Untold Stories – Even Captains Prayed,” you can contact John Slemp via email. John is particularly interested in hearing from anyone who may wish to collaborate with him on the project. It has been a labor of love for John but we would love to see the work published!