Photography is a fun sport, yet it can get expensive very quickly. Many newcomers unaware of the great bargains out there are put off by the high cost of lenses and gear.

We decided to take sticker shock to the next level and compose a list of the most expensive camera lenses ever sold. Don’t worry about leaving your American Express card at home — it won’t help you afford these bad boys. Of course, this is a great page to send to clients when they ask why you won’t shoot a wedding for $200. Don’t forget to create your free Pixsy account so you can start protecting your work and recovering lost licensing revenue from stolen photos! Maybe one day you can treat yourself to one of these! 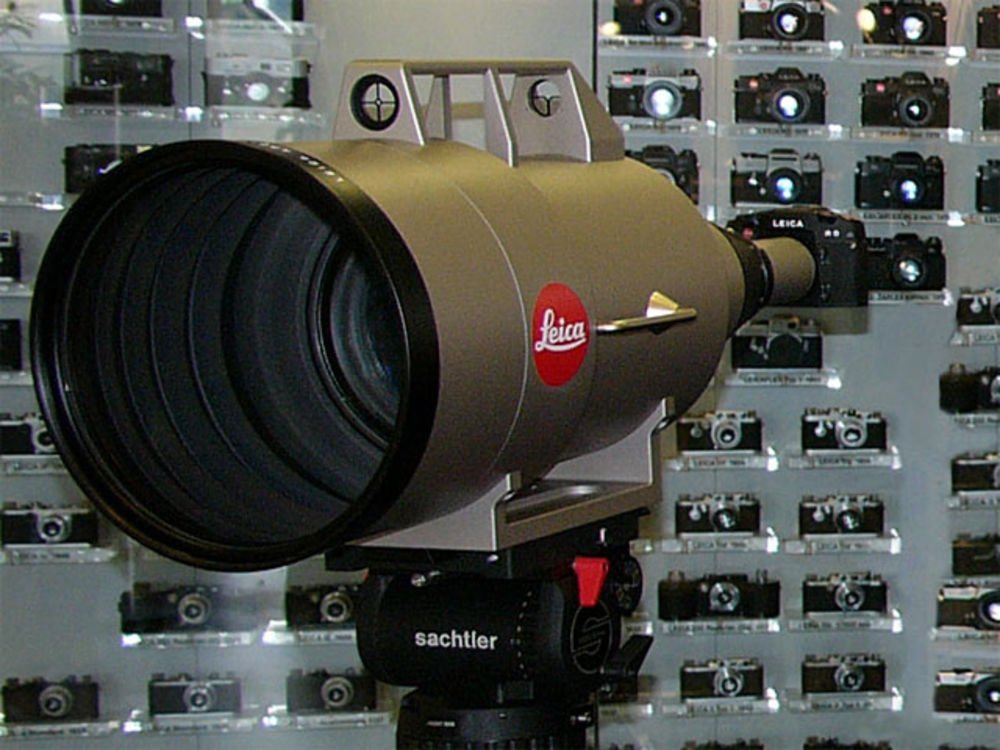 Leica made this custom lens for Sheikh Saud Bin Mohammed Al-Thani of Qatar, at a price just topping $2 million. The world never found out exactly what the Saudi prince used it for, or why he needed a 1600mm focal length in the first place.

With a weight of 132 pounds, it’s no wonder the owner also bought a custom Mercedes to lug it around. Throw a 2x teleconverter on it and you’ve got 3200mm of close-up goodness. Al-Thani,  arguably the most extreme gear addict of all time, unfortunately never released any sample images. As of the writing of this article, we still have no technical information on the Leica lens, nor any idea where it is now.

Nikon first unveiled this rare lens at Photokina in 1970. This prime, designed for special scientific and industrial applications, is actually able to see behind itself! A series of filters are actually built into the lens since you obviously can’t fit any on the front.

Nikon later released an updated version in the 1980s, but good luck finding one anywhere. One Nikkor 6mm recently sold at auction for £100,000 ($160,000). The instruction manual can be viewed for free here.

This is the largest Canon lens ever made and only a handful exist. B&H Photo dubs it, “The Mother of all Telephotos,” but this thing looks more like a monster than a mother to us. It’s more than capable of producing clear images of scenery miles away. B&H has a lightly used model priced at $120,000, but supposedly Canon has been custom building new ones since 1993. Minimum focusing distance: 46 feet.

The Sigma 200-500 is the only 500mm lens that shoots at an aperture of f/2.8. Its 34-pound weight makes it a featherweight compared to the Leica 1600mm. The $25,000 street price and included 2x teleconverter also makes it a relative bargain. You can pick one up for Canon, Nikon and Sigma mounts. Expect to sell at least one organ to afford Canon’s expensive camera lenses. Priced at more than $13,000, the Canon EF 800mm is designed for the pros among pros.

Released in May 2008, it is meant for long-range photography like sports, wildlife, and nature. Don’t expect to use this thing without a tripod by the way. At over 10 pounds, it probably weighs more than your camera, too. Another built-to-order lens for the Arabic world. In fact, it’s the largest non-military tele lens on Earth. That doesn’t tell us much about what it was made for though, and we don’t even know its exact price — its only included on this list because, well, it must be one of the most expensive right?

Here’s what we do know: the camera was developed by Carl Zeiss, for a customer using a Hasselblad 203FE 6x6cm medium format camera. The unique glass types required for the lens had never been cast to this size. In fact, the lens blanks alone weigh more than 25 kg (55 lbs.) and cost more than a luxury sedan!

Have you ever wanted to photograph an object that was 18-32 miles away? This extremely rare mirror lens from Canon is the best, and perhaps only tool for the job. With its focal length of 5200mm, the lens is approximately 1/10 the magnification of the Hubble telescope.

It looks like a literal cannon, and many suspect the lens was a government-ordered cold war spy tool. Weighing in at 100kg, the extreme focal distance sadly wouldn’t make it worth dragging this beast up a hill for stargazing.

This is it for the list, but there are plenty of other expensive specimens out there. Keep in mind that these expensive camera lenses were for the most part designed for very special circumstances. Gear is only a small part of the equation in taking good photos — ultimately the photographer’s skill is the most important factor. Don’t let gear lust get the best of you.

Want to treat yourself to a new lens? Create a FREE Pixsy account and recover lost licensing revenue. Many of our photographers have been paid enough in compensation to be able to afford some of these!!